“I passed the little towel ‘Be You a Blessing’ (and the anointed oil) on the wounds and they healed.” 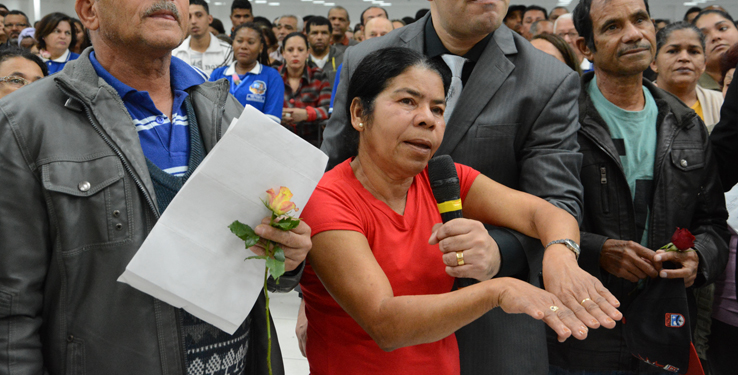 “Wounds appeared on my arms and they spread along my body, but they were so hard on my arms that made them swollen, scratched, hurt, and bled a lot more than the others.” tells Maria de Lourdes Pereira Soares, 59, resident in Andaraí Bahia. “I spent two years suffering, passing creams, having remedies, injections, hearing form the doctors that it was leprosy and there was no cure, the treatment was just palliative”

With her healthy body, Maria testifies that nothing is above God`s Power. “When I got to know about the TV program of the Worldwide Church of God`s Power, I spent my day watching its program and praying for the Lord. I called the call center of prayers and ordered a little towel and the anointed oil. So, when they arrived, I passed the little towel ‘Be You A Blessing’ on the wounds and they got drier and drier, pain and scratches were gone.

When I had another doctor`s appointment, he asked for exams and all of the wounds were dried. The doctor became astounded, he asked me how that happened, and I told him it was God`s hand. I glorify the Lord because I don`t have anything else”.

"Whatsoever thy hand findeth to do, do it with thy might; for there is no work, nor device, nor knowledge, nor wisdom, in the grave, whither thou goest."
(Ecclesiastes 9.10)
© 2022 Worldwide Church of God's Power. All rights reserved.
Desenvolvido por Nativa Desenvolvimento
Política de privacidade