I live under the determination of faith

“Apostle told me to calm down an determined life to my son”. 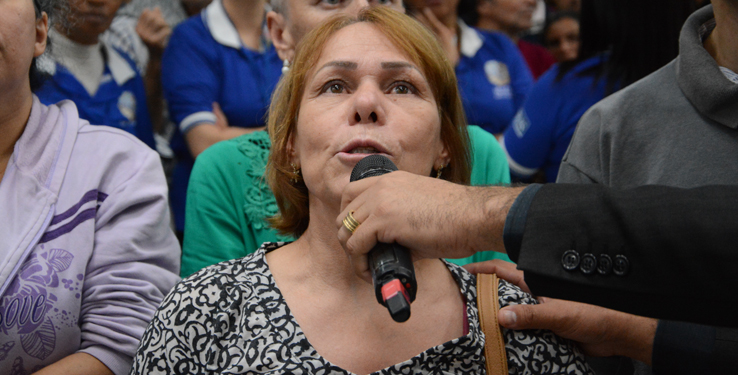 “My son, 25, was robbed and reacted to it. The robbers caught him, beat him, pierced his skull with a screwdriver, which crossed the cranial cavity from one side to another”, tells the resident of Mogi das Cruzes Joana Ribeiro da Silva, 55. “He was taken hurriedly to the hospital and he was hospitalized in the Intensive Care Unit, but when they put him tubes, his brain death was determined”.

Joana`s son, Rogers Vinícius Teodoro, 27, was hospitalized with stroke and stabilized with equipment. ”When I visited him, he was already dead, cold, in the ICU”, explains Joana, “he was living because of equipment, he didn`t move, he didn`t answer, his eyes were like fish`s eyes. He spent months in bed of the hospital with doctors allowing me to come in and look at my son that way because I`m single and he is my only child.”

Joana became hopeful by watching the TV program of the Worldwide Church of God`s Power and seeing many miracles and wonders being performed in the name of Jesus. “After seeing those people being healed, I understood the preaching, days watching in the hospital, the doctor came with the news that they wanted to turn off the equipment of my son because there was no life or reaction anymore. I didn`t accept and I started seeking the Lord, so I decided to come to the Worldwide City of God`s Dreams in Brás to ask for Apostle Valdemiro Santiago to determine life for my son” At that occasion, the Apostle Valdemiro Santiago was coming from a great concentration of faith and miracles in Santa Catarina. “I left the subway station and ran towards the temple, desperate, shouting for help and I shouted during the service too because I wasn`t able to approach the altar. There were so many people and I was aware it was for Roger`s life, I needed a miracle otherwise I would lose my son. For shouting so much Apostle looked at me from the altar and told me to be quiet. He also told me to come back to the hospital because my son was alive and well. It was all that I had to hear.” Joana came back to the hospital at the same moment. “I didn`t tell Apostle why I was shouting and crying, but he determined exactly what I believed he would. When I arrived at my son`s room, the doctors were with him, and when they started to take the equipment off him, he reacted. One of the doctors looked at me and told me: “daughter, your God is strong. I started to glorify God inside of me very happy like I was never before. Another doctor told me that my son would be unmovable, he wouldn`t walk, but I didn`t accept because I knew my son was healed for the Power of God”. This Sunday, April 30th, 2017, Rogers followed his mother to the altar walking normally with no signs, and talking perfectly. “I am alive for the work of this ministry. I thank God and my mother for my life”, declared. “This work is everything for us”, completes Joana, emotionally.

“For the needy shall not always be forgotten: the expectation of the poor shall not perish for ever.”
(Psalm 9:18)
© 2022 Worldwide Church of God's Power. All rights reserved.
Desenvolvido por Nativa Desenvolvimento
Política de privacidade