“The doctors said I should order a coffin while I was alive”. 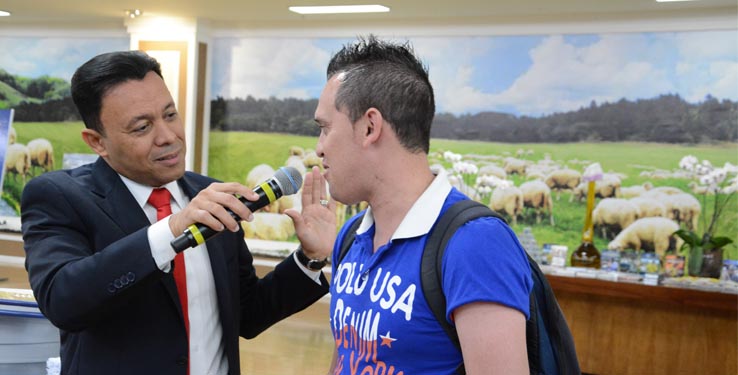 “I spent four months hospitalized, sat down on a wheel chair, weighted more than one hundred kilos because I was swollen with the two kidneys stopped, and thrombosis I the lung”, tells Marcos de Jesus da Silva, 30, resident in Itupeva, São Paulo.

“I was dependent on related ones for everything, my father used to give me shower at the hospital while I wanted to do something, but I couldn`t. The doctors had several exams to see what they could do to me. I had hemodialysis because of my kidneys, and they told me to order my coffin while I was alive”.

According to Marcos, “my mother was the one who met the Worldwide Church of God`s through the TV program and she started to seek God for me. She brought me a little towel Be You A Blessing and passed it on my body. Every Sunday mornings, she passed by the hand imposition with the Apostle Valdemiro Santiago carrying my picture asking God for my recovery at the hospital”. God`s work in Marcos’ life was extreme. “God answered my mother`s, mine, and my family`s faith. Pains were gone, I had many exams and the cure was confirmed that even doctors couldn`t believe their eyes when it happened. According to expert, my kidneys are like baby`s and there is no trace of thrombosis either in the lung or any other place. After all that, I started working again and God has thrived my life and my family`s life. I`m very thankful for God.”

“My voice shalt thou hear in the morning, O LORD; in the morning will I direct my prayer unto thee, and will look up.”
(Psalm 9:9)
© 2022 Worldwide Church of God's Power. All rights reserved.
Desenvolvido por Nativa Desenvolvimento
Política de privacidade