“I started attending and passing the little towel Be You A Blessing, anointing oil on the place, praying and crying out to God" 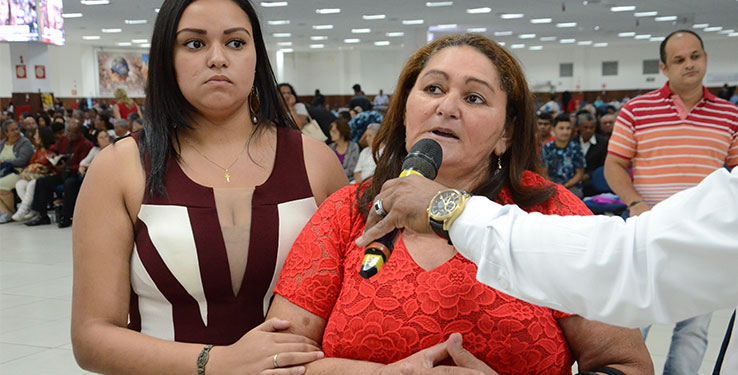 "Two years ago, I began to feel a burning sensation on my left breast and I was worried, I went to the doctors and had to do a lot of tests, it showed a lump and they prescribed me mammography, which confirmed the report”, says Maria Valido Cruz da Silva, 52. “After receiving the news, I was a bit evil, but Jesus caught up with me”.

According to Maria, “I got to know about God`s Power while I watched the service on TV, so I became sure that God would keep my life safe and would give me the victory. I started attending and passing the little towel Be You A Blessing, anointing oil on the place, praying and crying out to God and He made the miracle”.

With the exams, Maria concludes. “I went back to the doctors, ordered new tests, which confirmed the work of the Lord about my life, I don't have anything else, to the glory of God, I don't feel pain, never felt. I give my testimony to many people, and since then, I'm a worker bee in the House of God, with Jesus”.

"I am he that liveth, and was dead; and, behold, I am alive for evermore, Amen; and have the keys of hell and of death."
(Revelation 1.18)
© 2022 Worldwide Church of God's Power. All rights reserved.
Desenvolvido por Nativa Desenvolvimento
Política de privacidade