God's Word does not return empty

"The impression I had is that I was being dismissed, but God works in a wonderful way". 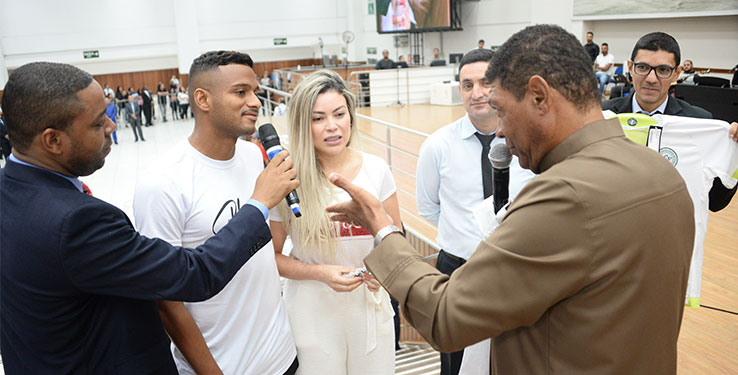 After a strong hug to the Apostle Valdemiro Santiago, the soccer player for São Paulo FC, Reinaldo Manuel da Silva, 28 years old, thanked once again what God has done in his life. "Some time ago, I was booed on the pitch and the Apostle Valdemiro Santiago, that is a fan of São Paulo, contacted with me and said he was sad at what happened. He prophesied in my life that I would overcome that condition ".

After the incident, the situation of Reinaldo didn't seem to improve. "The soccer team of Sao Paulo sent me to play for Ponte Preta in a loan condiiton and, when the Chapecoense was remounted by players on loan, I was dismissed from São Paulo to go compose the new team. The impression I had is that I was being dismissed, but God works in a wonderful way "

According to Reinaldo, it was after that when everything changed. "The Chapecoense, I had the opportunity of showing my football and people started paying attention to it, thank God. As Apostle prophesied, the fans of Sao Paulo began asking for me to come back to the team, as if I were a true star and, this week, I'm back to São Paulo, for the Club, in a completely different situation than when I left. God changed everything. I'm very grateful to Jesus and to this work, for everything that has happened to my life ".

"He that walketh with wise men shall be wise: but a companion of fools shall be destroyed."
(Proverbs 13.20)
© 2022 Worldwide Church of God's Power. All rights reserved.
Desenvolvido por Nativa Desenvolvimento
Política de privacidade