Child with poor testis formation is free from surgery 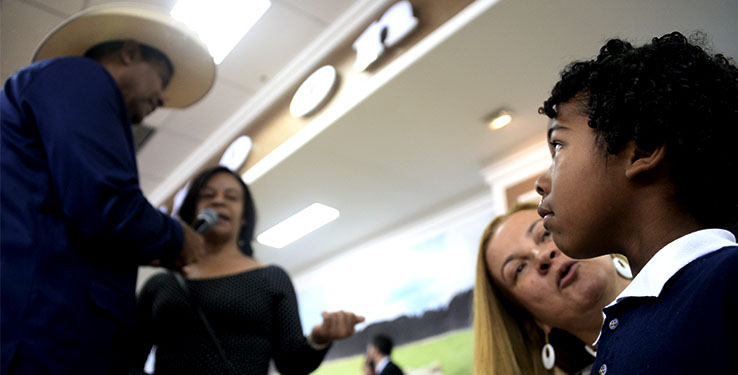 Eight years ago, real estate broker Rosalina Aparecida Ferreira, 46, was entering the World City of Dreams, in Bras, in São Paulo for the first time. She would never have imagined that the act would generate so many spiritual breakthroughs for her life and family. Rosalina responded to the neighbor's invitation, which for 30 days invited her insistently, but always heard "no". The friend was very resistant and said "not liking the church," he told the Apostle Valdemiro Santiago. The broker had cancer of the uterus. He suffered with recurrent bleeding and lost 24 kilos. When it is cured, it recovers the quality of life and also receives blessings in the academic area, returns to college and attends Law. The miracle story continues in the generations that follow.

His grandson Nicolas Miguel, now 5 years old, stopped having surgery to correct cryptorchidism - malformation of the testicles - when he was 3 years old.

The testicles are formed in the region of the abdomen and descend into the scrotal sac. This path was not obeyed by Nicolas' body, his testicles had the migration path interrupted. The organ was standing in the crotch region. Near the date of the surgical procedure, the child is ministered by the Bishop Franciléia who embraces him and prays declaring a cure. Two days after the encounter, the testicles descend and the surgery is canceled. A frequent spectator of the programs of the World Church of the Power of God, Nicolas likes to follow the words of the Apostle and always asked his grandmother to visit the church in Brás. When she called him, "she quickly got ready," said Rosalina, who moved from Itaquera, east side of the city of São Paulo, to Brás with her grandson. Upon arriving at the temple, the child did not rest until arriving in Valdemiro who presented him with CDs of preaching and bullets to reciprocate the affection of Nicolas. And before saying goodbye the Apostle asked how he was, without thinking twice the boy replies: "Healed in the name of Jesus!". This family lives the promise assured in Deuteronomy 7: 9 "You shall know that the LORD your God is God, the faithful God, who keeps covenant and mercy for a thousand generations to those who love him and keep his commandments" . Do you also want to achieve the transformation of your home? Look for a temple of the World Church of God's Power near your neighborhood and attend one of the services. There are more than 5 thousand addresses worldwide.