Leg is no longer amputated

Living in São Paulo, the IMPD's diarist and worker, Marli Rodrigues, exercised her faith so that her mother could be cured in Pernambuco 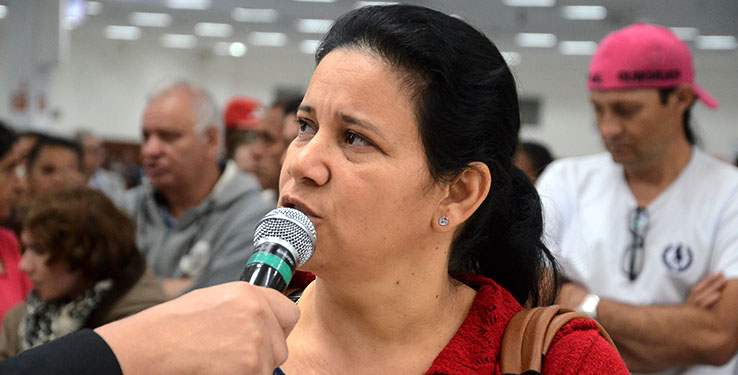 Calloused hands and a long field to be plowed. The scorching sun warns that the work will require a lot of resistance. In the heart, the memory of the children's smile is the motivation that pushes the hoe in the preparation of the earth to receive the seed. A life of suffering, marked by effort and perseverance. Always focused on ensuring the survival of the family. This was how retired agriculture, Maria da Conceição, 72, spent her days in the backlands of Pernambuco while she was one of the home providers. The heavy routine left marks on the body. The legs were most affected. Months ago the body accused of physical wear and tear. It all started with a blister on one of the legs. The formation became a wound and soon the foot began to darken. Due to lack of resources in the region that resides, it was referred to the state capital. Arriving in Recife, the medical team informs that they would need to take emergency measures to save the old woman's life. The first would be to remove your fingers and wait for recovery to define the next steps. Before the surgery, the specialists go back and give hard news to accept: it would be necessary to amputate the foot. Afflicted, the children get in touch with their sister who lives in São Paulo, the diarist Marli Rodrigues Pereira, 40 years old. On the telephone, they tell details of the situation and she redoubles the prayers for her mother. Work prevents her from traveling, but her cry was incessant. Daily he shed tears on the altar of God asking for the picture to be reversed.

To live miracles is not something conditioned by an instruction manual. God is unlimited and operates in a dimension far greater than human standards, can never be prevented when a believer prays in faith and He decides to bless it.

Even distant, Marli's fervent petitions cross Brazil and reach the north of the country. After a month in Recife, the mother of the diarist is discharged and continues with the care at home, surrounded by the love and care of the children. "In addition to giving spiritual support, through mercy, I also helped by sending money. Twice a week, my mother needed to do a special dressing that cost $ 100. And God honored, even though I did not receive a high salary, I was able to help. " The retired woman's foot got better every day. Months after that happened I was already in São Paulo to walk. On this occasion, Marli brought her to know the World City of God's Dreams. She participated in a special concentration where the Apostle Valdemiro Santiago placed his hands on the head of each participant. "She attended the service to the end and returned to Pernambuco very blessed." Rain of miracles When she arrived in São Paulo, Marli did not know the truth of God's Word and followed another line of faith. The first invitation to visit one of the IMPD churches was made by your boss. "I participated in the inauguration of the headquarters, here in Brás. After that day I never stopped going. Today, I serve in church groups with my daughter. His son and father were also freed from alcoholism. Both of them drank exaggeratedly and left the diarist with a tight heart. "They lived a lot of livings, especially my son who rides motorcycle and rides - in the backlands of Pernambuco it is common to use the horse as a means of transportation. I prayed a lot. I was very afraid of having an accident. "

"For we brought nothing into this world, and it is certain we can carry nothing out."
(1 Timothy 6.7)
© 2022 Worldwide Church of God's Power. All rights reserved.
Desenvolvido por Nativa Desenvolvimento
Política de privacidade