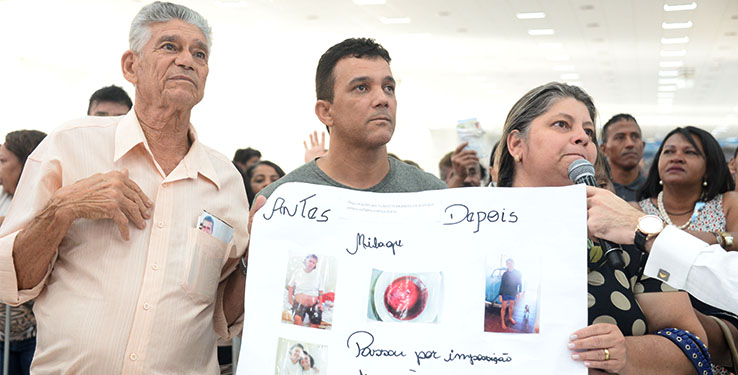 The poster that retired driver João Fernandes da Silva, 76, held, drew the attention of the Apostle Valdemiro Santiago from the altar of the World City of the Dreams of God in Santo Amaro, south zone of São Paulo. From a distance, the man of God saw the photos that proved the healing of the driver's daughter. Solange Aparecida da Silva, 49, had a fibroid with 7.9 kg. The benign tumor had already been diagnosed 20 years ago, but the woman refused to operate because she felt insecure with the procedure.

The unusual and exaggerated size of the tumor inflated the abdomen to the point that many confuse it with an advanced gestation.

In search of the cure, they traveled from Patrocínio, in Minas Gerais, to the imposition of hands in the IMPD with the Apostle Valdemiro. Hours later, returning to Minas, Solange began to feel severe pain and entered the hospital with an intense hemorrhage. "The doctors interned her and gave her medications to stop the bleeding. She was then referred to surgery where the myoma, uterus, and ovaries were removed. On the days he was in the hospital, it took five blood bags. The mother anointed her with the washcloth every day until discharge. Now we are relieved and grateful to God for having removed the myoma. " Seek God Are you or any relatives facing a difficult diagnosis? Seek God. Only the owner of all power is capable of accomplishing the impossible. Look for the nearest World Church and receive the word that will change your life.

"And they that shall be of thee shall build the old waste places: thou shalt raise up the foundations of many generations; and thou shalt be called, The repairer of the breach, The restorer of paths to dwell in."
(Isaiah 58:12)
© 2022 Worldwide Church of God's Power. All rights reserved.
Desenvolvido por Nativa Desenvolvimento
Política de privacidade