Vigil of the Multiplication

Faith and miracles in the name of Jesus 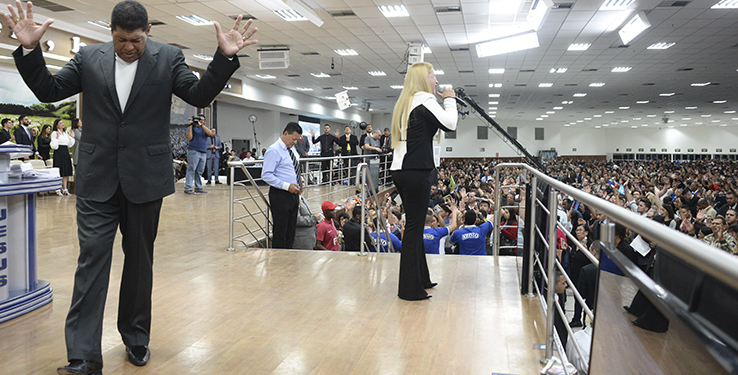 August is the month, which was prophesized by the Apostle Valdemiro Santiago as the month of prosperity. Friday, August 11th, 2017, Apostle ministered the Great Vigil of Multiplication at the Worldwide City of God`s dreams in the East Zone in São Paulo, Brás. Many people delivered the purpose of contributing with the fifth of their income, for the good running of the work of God.

Songs, praising, a lot of anointment and power of God manifested in miracles and wonders fulfilled the time of the vigil with many testimonials of what God has been doing in people`s lives, those who believe in Him. The Apostle Valdemiro Santiago ministered the message to bless everyone`s lives, and you can see it in this link.

The vigil had the presence of a crowd from all over São Paulo and caravans from other states of Brazil as well as visitors from other parts of the world as usual, to seek and thank the name of Jesus. The Apostle received souvenirs, and gifts as honor of Father`s Day a little before the end of the vigil, which is celebrated on Sunday, August 13th, 2017 here in Brazil At the end of the vigil, Apostle Valdemiro Santiago performed the consecration to God of four more bishops for the Work of God. “All of the four of them are already bishops before the consecration because the function of a bishop is not the position, a bishop is made much before that, in his heart, in his attitudes, in his treatment towards others. The One who fulfills the churches is Jesus Christ and He just sends people when the leaders love Him and His people. People know the blessing they are given come from God. They come up with a link with the preacher who announces them their victories. Therefore, the more love we have, more God will use you”, declared the Man of God.

“The wisdom of the prudent is to understand his way: but the folly of fools is deceit.”
(Proverbs 14:8)
© 2021 Worldwide Church of God's Power. All rights reserved.
Desenvolvido por Nativa Desenvolvimento
Política de privacidade