The 4th edition of MDA happened

The event brought together thousands of people from the World City 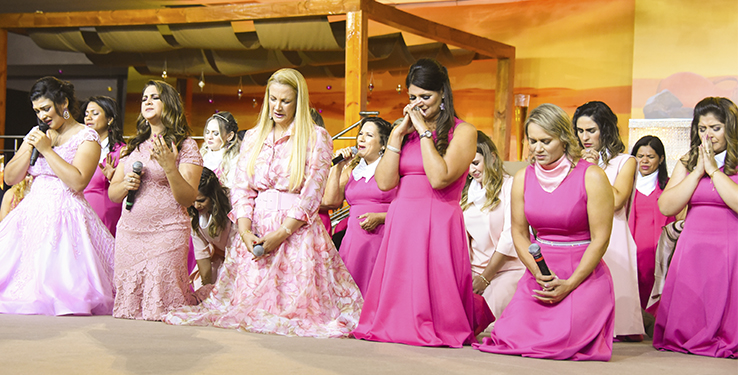 On this last Friday (12/04), the great vigil of the Women of God in Action took place, in the World City of the Dreams of God, Zona Leste - Brás. The event was led by Pastora Raquel Santiago, founder of this project. The gathering brought together women from all over Brazil and around the world, a crowd took over the World City. It was hours of praise, worship, and prayer for the Lord of hosts.

The meeting was attended by the leader of the World Church of the Power of God, Apostle Valdemiro Santiago who went up on the altar singing with his daughter Juliana Santiago, and said: "It's a beautiful party, congratulations to all the Women of God."

The Vigil also received names of the gospel music, like: Singer Juliana Santiago, Pastora Bruna Karla, Elaine Martins, Group New Essence, Rebeca Carvalho and Sarah Beatriz. The dawn passed very quickly, because the movement of the Holy Spirit took over the event, besides praises and praises, also happened the great Baptism, and several lives could descend to the waters and a play. And as a key of gold, Bispa Franciléia ministered the passage of the 10 virgins, theme of the Women of God in Action this year, the ministry you can follow the link below:

“Concerning thy testimonies, I have known of old that thou hast founded them for ever.”
(Psalm 119:152)
© 2021 Worldwide Church of God's Power. All rights reserved.
Desenvolvido por Nativa Desenvolvimento
Política de privacidade