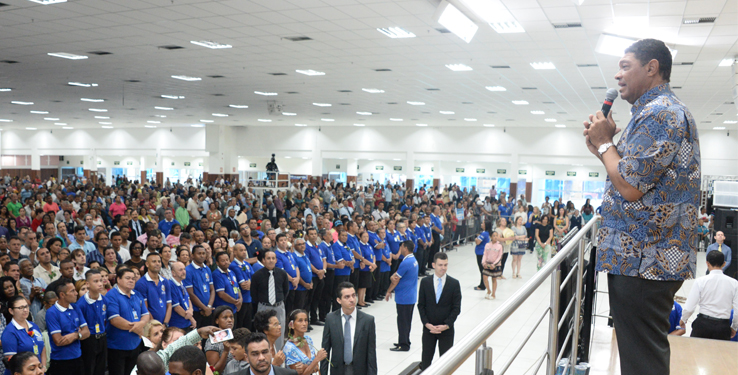 Zacchaeus was one of the worthless people, a trash to the society, the most hated man from his country and didn`t mind hiding it. From Luke 19.1 on, we get to know about Zacchaeus and his unlawful assets as well as his wish, which changed his life. He tried to see who Jesus was.

The gospel is preached all over the world, for several reasons, but what it is important is to be preached. Inside the gospel, there`s a division between the world and the gospel. There`s a difference among churches in relation to the manifestation of the presence and the power of God at each one of them.

Zacchaeus did so many wrong things and he thought he was worthless. There are so many moments that we feel ourselves so unable when we don`t know what to do. He had many assets, which were acquired unlawfully and he let all of them apart because the priority in his life was Jesus. It should be ours too. We should make Jesus our treasure. He realized that the secret of the success was the desire of seeing Jesus fulltime in his life. It`s impossible for you not to be delivered from your problems and addiction if you want to see Jesus. Zacchaeus wanted to see Jesus, but he was not able because he was short, so he climbed up a fig tree. He was hidden all the time because people wanted to kill him. There`s chase, unfairness, but there`s also a Word in Romans 8.28 which says that we are aware that everything contributes to the well being of those who love God. Do your best and come to see Jesus, you will get everything you target. Zacchaeus was sentenced by the society; figure out the King of the kings, the Saint and Fair, would mind about him. He trembled for fear. He didn`t wait for any reward or return, any comprehension from Jesus, he just wanted to see the Lord. His thoughts were like those of people who have already lost everything good in life, but he wanted to see Jesus. When Jesus arrived, He told Zacchaeus to come down because He would go with him to his home. Jesus calls him by his name making it clear that He knows everyone in details, fully. The Lord had never seen that man, but knew his name and who he was. He knows everyone. That guy cheated and acquired so much that he was on the top of a pedestal. Come down fast, these words said by Jesus suggests that, to have a meeting with God, the person has to be empty, to come down, and to put himself in the same level. God is above us, but to be with Him, we have to come down. If you wish to see Jesus in your life, God will save you. In the limit, Zacchaeus had the best wish anyone should have had. The one who want to see Jesus in his life, be sure he will see Him. When the Master calls, the happiness arrives. We have salvation because the Master calls us, so, be happy and receive Him. Everyone may win. When the society doesn`t know you is worse than not like you. But be calm because Jesus knows you. He provides us with the victory. Zacchaeus wanted to go in peace to see Jesus, but the Master sees him, calls him and said He would sleep at his home. Figure out Zacchaeus` happiness when he heard that, but people judged him for being a sinner. Those ones who are politically correct look at others judging them. When God provides people with anything, they feel themselves powerful for receiving. They think they are pure for being forgiven. Zacchaeus had a radical change in his life when he received Jesus. He really regretted and donated everything he had gotten to himself, he reinstated. Jesus doesn`t need our assets, He asks for our resources to see our confidence, to check what comes first in our life, to see who is faithful, to check what your treasure is. He didn`t need the assets of that young rich man, but He knew the heart of that man was in his assets. Never allow devil beat you down psychologically because if you are at the church, it`s because Jesus called you. Never pay attention to other things, try to see Jesus. God doesn`t need anything from anyone. What God really wants is to go home with you and He will.

He that passeth by, and meddleth with strife belonging not to him, is like one that taketh a dog by the ears.
(Proverbs 26:17)
© 2023 Worldwide Church of God's Power. All rights reserved.
Desenvolvido por Nativa Desenvolvimento
Política de privacidade