The Great Concentration of Faith and Miracles in Rio de Janeiro

The message of hope and changes seals the concentration in Campo Grande, Rio de Janeiro 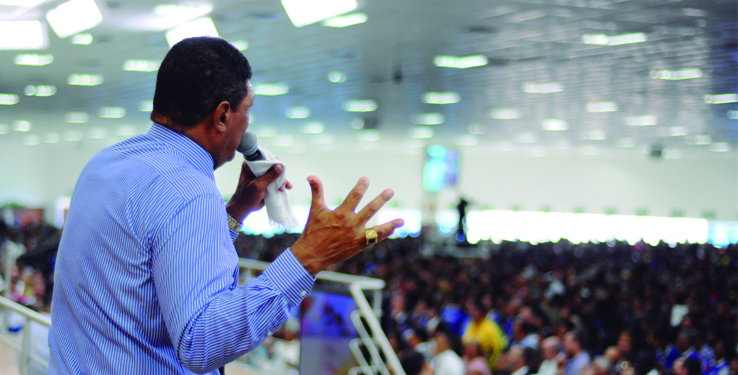 Performed in Centro Esportivo Miecimo da Silva, on Olinda Ellis Street, 470, in the neighborhood Campo Grande, no Rio de Janeiro, a great concentration of faith and miracles was performed by Apostle Valdemiro Santiago, and the bishop Franciléia, the bishop Roberto Santana and other bishops and pastors from the region. It started with the hand imposition, the concentration that fulfilled the sports center and surroundings was sealed with miracles and wonders performed by the Power of God through the life of His servants.

“Today, God starts to change the history of Rio de Janeiro. God`s dreams are bigger than mine. The Lord knows what each one of you need and has already provided you with, my presence here is just a statement of your victory, which has already arrived.” Declares Apostle Valdemiro Santiago on the assembled altar in the sports center.

In Apostle Valdemiro Santiago`s words, “the Bible says that, when God delivered the victory to Israel, that population thought it was a dream. Pay attention to what God has done to us. When Elijah went to Zarephat, due to the command of God, the population had died for starvation, but there were a widow and her son. The prophet arrived with a message from God, who ordered her to feed him, but the widow didn`t have any left for herself. Did the prophet take or bring her blessings? He brought her blessings. Things are different in the world when we live according to God`s guidance. That widow took sticks to prepare her and her son the last meal. Elijah was there as the Work of God and prophesized that the barrel of meal would not waste, neither would the cruse of oil fail. Elijah told her not to fear. Sometimes the situation is so harsh that we are unable to see the light, a solution, and a way of reverting it. All of the opinions are contrary. When we hear that, don`t we think there`s no way round? We shouldn`t. That`s why God says the Righteous lives by faith. We are guilty of crisis. If God gave us faith to put an end to any crisis, we have just to pray for heaven to be opened in our lives. By faith, your luck changes today. The ones who obey, the blessings come on them and overtake them. That`s what it is said in Deuteronomy 28. It`s necessary to wait for the blessing, be faithful and persevere. Many testimonials of the Power of God, wonders and miracles that follow the ones who believe in Jesus Christ were also present and sealed many people`s live. The ministered message can be followed through this link The Apostle also blessed people, authorities, candidates, servants, and pastors. “The blessings of the Lord will reach everyone from authorities to the most helpless one in crime. The Lord send a legion of angels over this city to make a great work on behalf of Jesus”, declared the Man of God.

"And they that shall be of thee shall build the old waste places: thou shalt raise up the foundations of many generations; and thou shalt be called, The repairer of the breach, The restorer of paths to dwell in."
(Isaiah 58:12)
© 2022 Worldwide Church of God's Power. All rights reserved.
Desenvolvido por Nativa Desenvolvimento
Política de privacidade