Message dedicated to the families of the victims of the flight, which the Chapecoense soccer team was on. 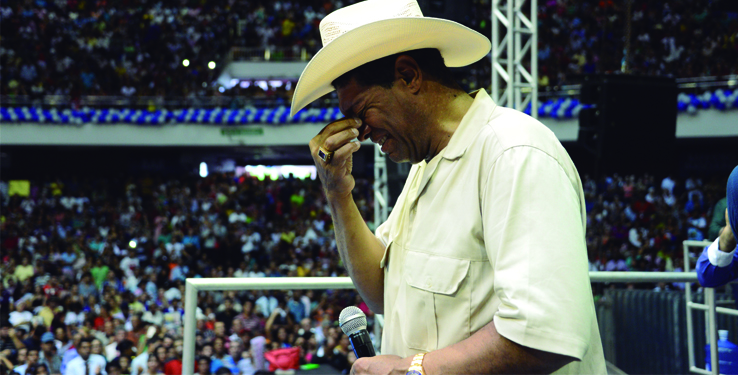 The accident, which cost 71 people`s lives on November 29th,2016 in Colombia, with the aircraft that was taking Chapecoense soccer players, journalists, employees and members of technical commission of the club, shocked the country and the whole world because of its degree of tragedy. Saying in statement, Apostle Valdemiro Santiago declared about this accident:

“I missed all of you very much. I would like to express my sorrow to the families of those people who died in this plane crash, which was so tragic, to say that it`s part of life, despite sadness, angst of loss, and the feeling of missing. I would like to tell all members of those families, all of those who were involved in that, friends, we are praying for all of you.

Journalists’ families, eighteen journalists, nineteen players, and other professionals as a total, I wish God may comfort your heart. In Romans, it is said that everyone was made for God; who lives, lives for God; who dies, dies for God. Don`t be either sad or concerned about having happiness again because the Holy Spirit will work on your hearts. You, living families of the victims, belong to God, and those who passed away also belong to God. Be aware that life never ends, and we are everlasting. The Bible says, in Ecclesiastes, God put the eternity in men`s heart and I praise the Lord for putting this hopeful word in our heart. I was already a victim of an airplane crash in the North of the country. It was in the woods. I was together with my wife, the bishop. When the aircraft was falling, we cried out to God, I opened the selector switch and two tanks of fuel of the single-engine aircraft. The fuel of the tank of one wing came to the end. The pilot didn`t open the selector, and the plane fell down in the woods. The pilot wouldn`t open the single-engine aircraft, I did. So, there was an explosion and we apologized to the owner of the farm, but we survived. I thanked God for having provided me with this knowledge, because I grew up in the woods, and what I learned on that day. Once, the plane hit a cloud and everyone, who hadn`t fastened their seatbelts, flew inside the plane. I just had time to say “Jesus my Lord” and the plane became stationary in the air, then the turbulence was over. Another situation, we were informed that the engine of the plane stopped. It was double-engine. Everyone got astounded. They told us they would go round and round in order to put an end to the fuel, on the other hand, we would blow up. We prayed for landing well, it landed and we are here. Everything that happens, you and I have to have the following faith: If God wants to take us away, He will; if He wants us to stay, we stay. We have to learn to respect and trust in Him, whatever His decision might be. He decides the best condition to us, and looks after our happiness, which He provides us with, to be in our hearts longer. It`s not over here, but there are much more to be found later. We will pray for your lives. God bless you all, make you stronger, and save you for you to win together with Him.”

"For we brought nothing into this world, and it is certain we can carry nothing out."
(1 Timothy 6.7)
© 2022 Worldwide Church of God's Power. All rights reserved.
Desenvolvido por Nativa Desenvolvimento
Política de privacidade