It was paid high price for our salvation 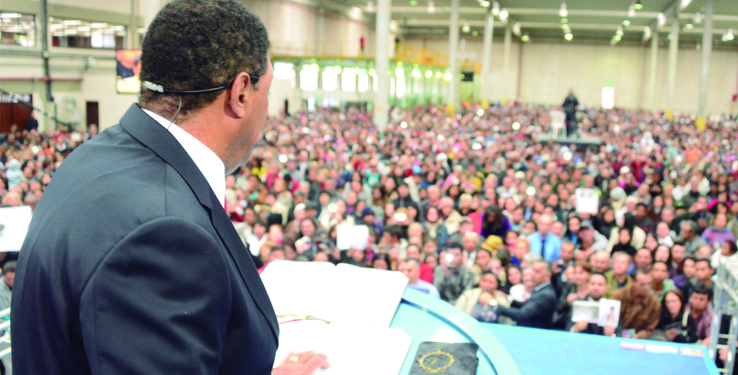 Colossians 1.11 said that we lived under the commandment of this emperor. There was no hope to us. Everything we lived, such as, epidemic, sufferings, pains, wars, or we still see comes from the influence of that empire because it still exists. The empire of the darkness is where it was, Lord brought us here and took us out of that empire. There will be a time when the emperor will be thrown to the fire of hell, but he continues there with his days numbered so far.

He is aware of his numbered days, so the emperor of this darkness tries to run his power and keeps watching us, surrounding us as a lion waiting for the right moment to beat us. He is neither omnipresent, nor omniscient, nor omnipotent. God is and observes everywhere all the time. He is able to see and separate all of us and detects hearts that belong to Him to order His angels to deliver blessings and victories.

We may observe people who are victims of the empire of darkness. The transport that takes us from there is voluntary. God never forces anyone to get onto the ark, He simply invites. We believers, don`t live under the domain of this empire anymore. So, we are not defeated anymore. The transport is to believe in the blood of the peace, it`s free of charge. If you think the light went off for a while, rebuke in the name of Jesus, because now you are in the kingdom of God`s love, which is pure light. Remember that it`s a kingdom and not an empire, it’s not a dictatorship. Even though, sometimes, some of them jump back to the empire and they are tortured again. When Eve and Adam sinned, they hid themselves from God because when we sin, we are ashamed before God and we don’t want our work to be manifested. The whole world is ashamed. They tried to blame one another, but no one except us should be blamed. We have the free will to choose whether to live in the empire of darkness or in the Kingdom of God’s love Because of our mistake, God wanted to put an end to men, but God found a solution as He does to everything. In this case, the investment was too high, it was His Son’s Life. The Holy Supper is to make us to remember of this high price. Jesus died for us. No father want to see his son dying, figure out the Father of Love. Our faith comes from the awareness of the emperor doesn’t have power over our life anymore, and who finds that out becomes very strong. When the son felt the pain, humiliation, rejection, offences, He prayed to the Father. He asked Him if it was really necessary, when He heard yes, He suffered and died. At the end, He said it was over, done, He took each one of us and free of charge. Despite that, there are some who don’t want to get the transport to the Kingdom of His love. You just need to accept the signal of His blood. On one hand, the empire of darkness, on the other hand, the Kingdom of the Son of God’s Love. In order to have an idea of how big the sacrifice God did to us, Jesus was sentenced to death for us. The cross was the evil death, but He was innocent. He was sentenced and payed for all of that. We were hijacked and God payed the high price with His Beloved Son to rescue us. Faith means to know how valuable we are to God. When you find this out, you overcome diseases, epidemics, cold. The origin of peace is the blood of Jesus. How many people seek this peace in drugs, people, actions, situations. When you become aware of the blood of Jesus Christ, which was spilled for you, peace comes into your life. Everything happened and happens through Jesus. Everything that was created had the origin in Him, which is the essence of all. He comes before everything else. God is perennial and through Jesus, men, you and I, are everlasting because He puts the eternity in our heart.

“What man is he that feareth the LORD? him shall he teach in the way that he shall choose.”
(Psalm 25:12)
© 2022 Worldwide Church of God's Power. All rights reserved.
Desenvolvido por Nativa Desenvolvimento
Política de privacidade