Do good and trust in God

Help the ministry and hear God`s man, so this way the Lord protects you and your family. 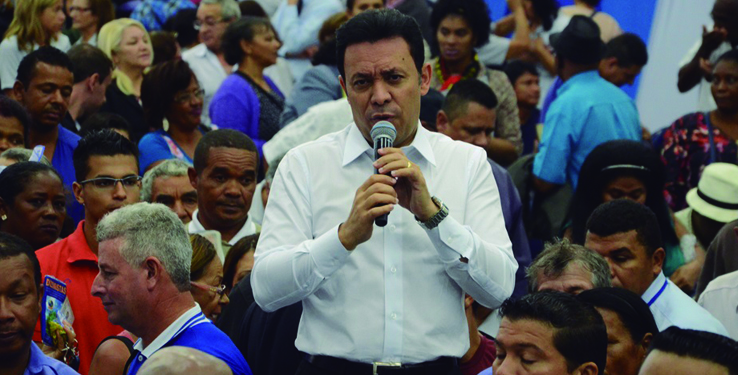 2 Kings 8.1 tells us that a famine would come over that land. Elisha warned the Shunammite woman against that problem. Because, according to 2 Kings 4.8, this woman testified her husband that Elisha was God`s man and that she used to feed him with bread. She did good to Elisha and every time he passed by their land, he used to eat together with them.

In order to see whether a person is saint, we have to check if this person is away from the world, not influenced by it and never follows trends. What people do the most is to look after other people`s lives. When you meet a righteous person, she calls attention.

That Shunammite woman, seeing that Elisha was God`s man, built a room for him to sleep when he passed by that region. Little by little, people have been giving up of doing good to others. That`s the reason why Elisha warned her against famine in that land in order to give that woman a chance of rescuing her family and relatives. The man of God is supposed to be someone who follows God`s voice. The word says to believe in God`s word and the prophets to thrive. When God`s man speaks, you have to listen and apply. That woman could have ignored Elisha`s words, but she was wise and obeyed him. The Shunammite woman spent seven years in another country and God saved her life. When she came back, the famine had destroyed everything. Someone could say that God abandoned her, but the way the problems arise is the way that God has to show His Power and His Glory. That woman cried to the king because he was the only one, humanly speaking, who could help her at that moment. She did what she believed it was right. She cried her rights as she lost her piece of land. And the king talked with Gehazi the servant of the man of God all the great things Elisha had done. There is neither coincidence nor luck. There is Divine Providence. Everything is under the control of God and everything is part of the Divine Plan. So, trust in God. When the woman came to the king, Gehazi recognized the woman and testified of her. Moreover, He cited the miracle because when she built the room to Elisha, the man of God prophesized that she would give birth to a baby, but she was barren. God gave her a boy, but he died all of a sudden. Elisha interceded for him and he came to life again. While the king talked to Gehazi, the king asked about the histories of Elisha and talked about this woman and the miracle of resurrection of the her son. Exactly this woman cried for her piece of land. Nowadays, what it is missing is to trust in God. When you believe in God, you can be sure that God never abandons you. The guard of Israel never takes a nap. Everything that happens in the life of the one who worships God is Divine Providence. Don`t get desperate. Never lose hope. That One Who called you is loyal and always fulfills His promises sheltered by the Holy Spirit. Nothing goes by without being fulfilled by His word. It`s clear, those people who don`t obey God`s word, will not receive. Just who believe and serve will receive. God is not like a man. He fulfill His promises. When the king confirmed that it was she, the king gave her everything that belonged to her and reimbursed her all the money that she would have received during this seven years as if the crisis had never happened. She did good without thinking she would have lost all of her assets. She was rich and relinquished all in favor of a man of God. When she lost everything, God was with her, protected her life, and brought everything back. She was a godly woman and did good. When you do good to the ministry, God remembers of you as Elisha was somehow doing the ministry and the woman contributed, so God remembered of her. At the first time, God remembered of her to warn against famine. Later, when she came back God provided the king with her history and brought all of her assets back as well as the amount of money she should have received while she was away. There was famine in that land, then many people lost many things, but the Bible reports just she with her assets restored. I call your attention to that, you are chosen by God. A thousand may fall at your side, ten thousand at your right hand, but it will not come near you. Never give up doing good to others. Obey God and never complain about what you have. Today you may have a little, but seed today for you to have a lot tomorrow. Thank God for what you have, the smallest thing because God is pleased by that. Praise the Lord.

"There is that speaketh like the piercings of a sword: but the tongue of the wise is health."
(Proverbs 12.18)
© 2022 Worldwide Church of God's Power. All rights reserved.
Desenvolvido por Nativa Desenvolvimento
Política de privacidade