Jesus provided us with everything to make the difference

See with faithful eyes for your ministry to be blessed 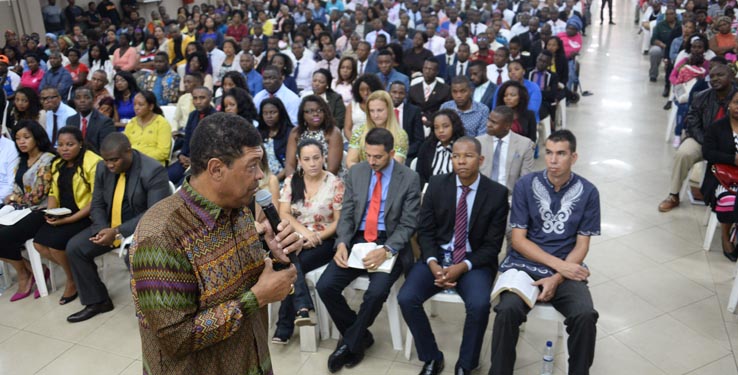 There are apostles and God’s men in the Bible who were more used than others. Today is the same as it was in the past and it will be always like that. The more you seek, you get deeper, you understand, you believe in Him, more God will use you to perform wonders, to touch people, open doors, gain souls.

God’s work is not easy, but God makes us able to it, to what God provided you with, for you to preach the word and be used. Sometimes, we face situations that seem we are lost and there’s nothing to do to help. On the other hand, there are others who know what to do in the same situation.

When they were surrounded, Elisha was calm and he knew what to do, while Gehazi was afraid. Apparently, the two of them had the same resources, but one of them knew how to believe in God. The quality and the success of your work, your ministry, depend just on your vision, the way you see God’s power. If you believe in God’s call, some are called to preach, others are called to support the ministry. You have to have vision and understand what God provided you with. During the first multiplication, in Luke, Jesus gave apostles a mission and they did things that they seldom couldn’t and they became scared. You servant, you might have already performed similar things in prayers and by Faith, and later you might have seen things that made you jolt. God wants to work in your life in a way that make everyone aware of His power, but in order to do so, you have to have Faith and vision. More important than the miracle and wonders is to be sure of the eternal life. The disciples returned to Jesus and told Him what they saw. Behind Jesus, there was a crowd because they knew God heard Him. People want to be close to those God hears and they have to see in your life, pastors, preachers, servants, bishop, that God hears you. Jesus, man, was welcoming and we also have to be welcoming to everyone. Jesus teaches us to welcome people and talk about God’s Kingdom. Jesus was so followed by everyone that when He was in the desert, a crowd was with Him. Three days of gatherings and everyone kept with Him. Like Jesus, preach and teach, put in practice to see the difference in your life. The desert is a figure of speech for the difficulties, sadness, disappointments, problems. If we take the presence of the Lord with us, even in the desert, we will never be alone. The success we get doesn’t belong to us, it comes from God. But it doesn’t matter where the success come from, what matters is to have it in your life. God put it for you to run it, but it doesn’t belong to you. Accept that what you have belongs to God and celebrate it. With the starving people, the disciples wanted to suggest Jesus something. Unconsciously or consciously, sometimes, we want to suggest God something. That’s one of our mistakes. They said to get rid of the crowd and Jesus said to the disciples to feed the people. He knew there was no food with the disciples for all of those people, He said to feed them because He knew they didn’t have food, but they had what it could generate anything we need which was the power of God. Even we portalt about what God provides us with in some moments and we get desperate because the world is cruel. When Jesus told them to feed that crowd, He meant the power of God and faith could generate food. Those disciples were we, preachers, pastors, bishops, servants. Jesus meant we, His disciples, have the power of God and through it we may support a crowd. We may not see what we have, but we have to believe in what we have. There were around five thousand people and the disciples said they didn’t have food, but they would provide some. What Jesus ordered to give those people, however, was not what belonged to us, but what belonged to Him and it is in us. Prophesize, minister, deliver victories, and when Jesus orders you to give people something, portalt about what you have and give what God provided you with. You can prophesize, pray, and minister and it will happen to people’s lives. Sometime after Jesus’ death, Peter, who learned that Jesus had given him resources, looking at a paralytic at the temple’s door said he didn’t have money to give, but what he had, he would give and prophesized the cure of that paralytic. If in the desert, Peter had the same experience and maturity, he could have looked at the sky and made bread and fish rain in there. The Bible is didactic, so it teaches. Everyone who was there ate and they were satisfied at the abundance which the disciples could have as well. Jesus meant He didn’t have five loaves of bread and two fishes, but He had everything they needed, wanted, desired. We have what we believe it was given by God. If you believe God gave you a lot, you will see a lot. Jesus and Elisha said that what we have in our lives, is there already. God provided us with much. We have to learn how to live by faith. If you do so, it’s sure God will give you the victory. What people search for, you have in order to give them. No one searches for you for no reason. God sends people to us.

"Unto thee lift I up mine eyes, O thou that dwellest in the heavens."
(Psalm 123.1)
© 2023 Worldwide Church of God's Power. All rights reserved.
Desenvolvido por Nativa Desenvolvimento
Política de privacidade