God`s miracle in our lives comes since our birth

"The Apostle touched my belly and, from that day on, the tests began to be negative and the pregnancy was healthy." 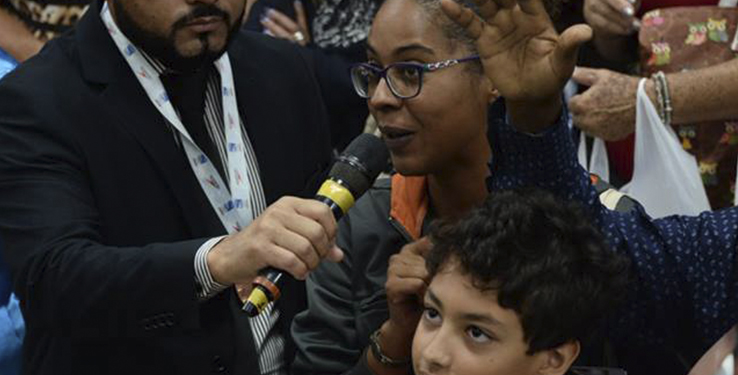 "My son Gabriel was diagnosed with hydrocephalus early in pregnancy," says the mother, Tania Cristina de Souza Silva, 41 years old, resident of São Paulo, São Paulo. "When I got the news, I was already aware of the word of God and of this work and I began to seek God with my mom, here at Headquarters, in Brás, hopeful to receive a miracle and have my son healthily to the glory of God"

Tania tells that the difference was on a date with the Apostle Valdemiro Santiago. "Down on the steps of the altar round, old, the Apostle touched my belly and, from that day on, the tests began to be negative and the pregnancy was healthy. My son was born healthy, with four years, was released in a pool and learned to swim. After that, he began competing as a professional swimmer and is a tithe giver in the House of God "

Accompanying the mother, Gabriel presented his medals. "I thank God for my life, for my health, for teaching me how to swim and the victories. Without Jesus, and without this work, I wouldn't be here. " With the mother, both glorified and witnessed the power of God in their lives.