The city of Caldas Novas receives a new temple 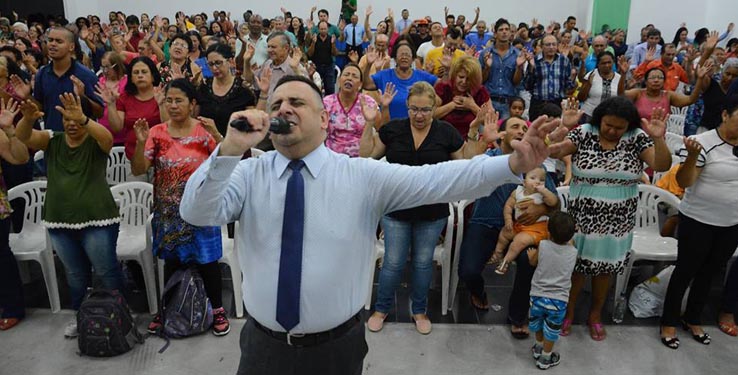 The place was overcrowded and another crowd followed it on a widescreen set on the street, which was interdicted just due to the opening of the temple. The newest church of the Worldwide Church of God`s Power is located in the city of Caldas Novas, a tour region of Goiás. The new temple was launched before a crowd and is located at the following address: Rua Capitão João Crisóstomo, Quadra 9, LT 10, SN, downtown.

According to the bishop Ricardo de Holanda, responsible for the Worldwide Churches in Goiás, and who launched the temple, the rent is much cheaper than the old one, which is near the new address. “The tithes and offers are the blood of the people”. So, when the bishop Luciano Calixto (responsible for this church) told me about this room, which was half of the value of the rent we used to pay, and the compatible structure to what we had before, I didn`t think it over and I told him to make the agreement with the owner of the real estate. “Today, thanks God, we already released the new temple for the honor and glory of the Lord”, said the bishop Ricardo to the present crowd.

A crowd of believers attended the launch to esteem it and to pray, worship, sing to God. The place was overcrowded and another crowd followed it on a widescreen set on the street, which was interdicted just due to the opening of the temple. During the opening of the temple, the bishop Ricardo consecrated the church spilling a cup of olive oil on the floor of the room near the altar. Several believers told miracles of cures, prosperity, and family. The baby of Regina Lopes Catanhede, who was hopeless by the doctors, surprised the expert ones. “Every time I took my daughter to the doctors, the diagnosis were terrible and I just cried considering I would lose her, but thanks God, she is fine for the honor and glory of the Lord”, she said carrying the baby in her arms, together with her husband and two more children of hers. Valter Rocha who arrived at the church with his financial life destroyed, declared he thrived. “When I met this church, I was in the misery condition, but God changed my life and today I am a man who thrives”, concluded.

“The discretion of a man deferreth his anger; and it is his glory to pass over a transgression.”
(Proverbs 19:11)
© 2021 Worldwide Church of God's Power. All rights reserved.
Desenvolvido por Nativa Desenvolvimento
Política de privacidade