Celebration is run together with the date of the soldier (Brazil) 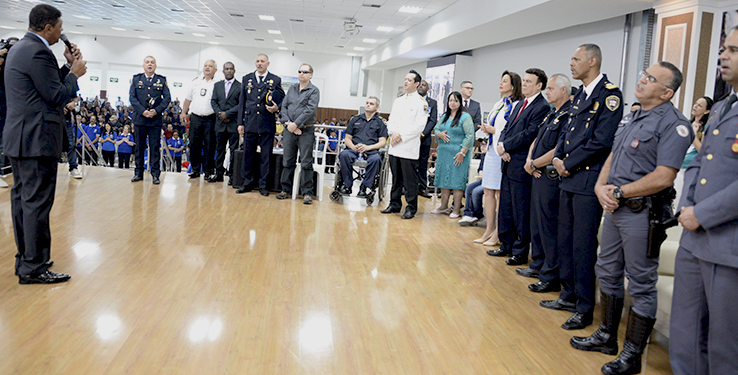 August 27th, 2017, the day of the soldier in Brazil, the Apostle Valdemiro Santiago counted with the presence of the armed forces of São Paulo in celebration, after the call to bless the lives of those who are committed to the public security. Dressed in their uniforms, a trained team from Geração Jovem Mundial (Worldwide Young Generation) participated with the homage, representing the date under the preparation of the Bishop Marcos.

Invited to perform the homage, Apostle Valdemiro Santiago followed the inspection of the group with the hymn of the police forces, as well as the Brazilian national hymn, which was sung together with the whole church in one voice.

After the start of honors, the police forces delivered rewards with certifications of recognition of attitudes of peace. Apostle Valdemiro Santiago and the Bishop Franciléia received the Grand Collar of the Knights of the police from São Paulo. Pastor Raquel Santiago and her sister, the singer Juliana Santiago, followed by Bishop Jorge Pinheiro and Pastor Nina, besides the Superintendent Inspector Euclides Corradin, received the medal of Tiradentes. The silver medal of Jubilee was given to congressmen Campos Machado, José Olímpio, and Rodrigo Morais. “I am happy at the recognition, but I want that every glory and honor be given to the master Jesus Christ”, said Apostle Valdemiro Santiago. The Bishop Franciléia declared: “I want to thank and ask you not to give up because like we arose for the work of God, you arose for people`s protection and help and you never refused in favor people indeed. Soldiers are hurt and killed many times, but you never gave up because you belong to Christ, prepared for the battle. We will always be praying for all of you in the name of Jesus.” It was also made posthumous tribute to the police officer Márcio Greik da Silva, a civil police officer who was killed by outlaws during his work defending the citizenship and peace, among evangelic people, received by his widow, Milena Greick and the award of the Citizen of Peace to the Bishop Marcos, leader of the Geração Jovem Mundial (Worldwide Young Generation). “For many years, I served the military forces in Africa and the world with my wife. We changed our uniforms, but not our principles and values, we changed our uniforms for Jesus Christ”.

“A brother offended is harder to be won than a strong city: and their contentions are like the bars of a castle.”
(Proverbs 18:19)
© 2021 Worldwide Church of God's Power. All rights reserved.
Desenvolvido por Nativa Desenvolvimento
Política de privacidade