Nominees give interview at the entrance of the event

Check out excerpts from interviews 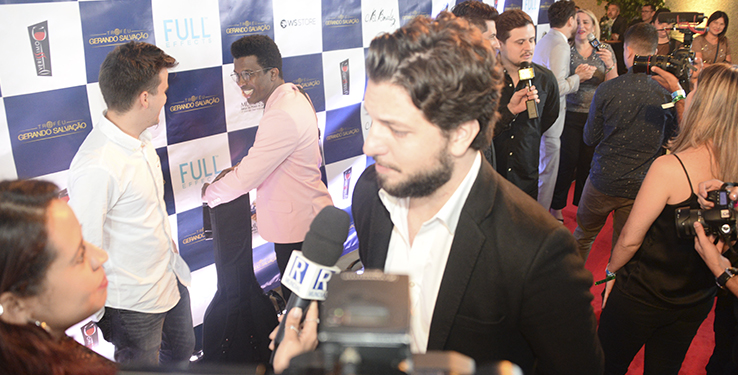 The trophy was held on Monday Causing Salvation (December 11) at Citibank Hall, São Paulo, by the team of Generating Salvation directed by Pastor Raquel Santiago. The event aims to honor singers the world through gospel award. Various artists were present at the event, and granted an interview to the portal. Gabriel Guedes was the first to arrive at the awards event, "I'm very happy to be here, and have been nominated in two categories, one for video and one for best new artist. Thank you all and God, and that His name be glorified, "said Gabriel. The Arrais composed by two brothers was represented just by Tiago Arrais because his brother André Arrais couldn`t be present. “I feel so sorry for my brother not being here, but at the same time I feel very happy for being nominated under musical duo of the year”, said Tiago Gabi Sampaio was competing under the category music of the year / songwriter. “I`m very happy at the nomination, but the honor and glory are God`s because He does everything”, said Gabi.

Isadora Sampaio was nominated under the category best new artist. “I`m so happy for being nominated, the event is very beautiful, wonderful indeed” comments Isadora.

Leonardo Gonçalves was competing under the category of the singer of the year. “Tonight it celebrates gratitude. The award itself is an excuse for us to gather in order to worship the Lord. That`s what it matters the most. I`m so happy to be here and I thank the Lord”, reports Leonardo. Bruna Karla was nominated under the category of Worship and song – the moment of prayer. “The event is very beautiful. We are not here for competing but for glorifying the name of the Lord. We are here for us to be joyful together we are one in Christ Jesus “, declared Bruna Seo Fernandes was competing under the category of best new artist: “I become very surprised and astounded at such great cultural project with artists from gospel music, flattered and happy for the recognition of talent and friendliness of many among us, who live to worship the Lord. Deep in my heart, I thank for attending such a great event” said Seo. Deise Jacinto nominated best new artist: “What should I say?! People, it`s a great emotion! Here it is what God prepared for us to have. I just have to thank and enjoy this wonderful party. Now, be according to God`s wish because it`s a great pleasure for me just to attend it”, confessed Deise. DJ PV was nominated under the category worship and song – Faith and celebration: “I was very surprised with the recognition, mainly because in the past, there was so much prejudice towards musical style at churches and just few heard those songs at evangelical churches. It`s good to see so many musical styles together valued as an instrument of worshipping used for singing to the Lord. Having space in this event? Then, my friends, happiness is doubled!” said DJ PV. Preacher Lu was nominated under the category worship and song - Faith and celebration: “All that is very good! The sensation of coming back is the best ever. Attending one more time is always a great joy and just God could provide us with such event like this one”, reports Preacher Lu. Ao Cubo (Dona Kelly), was nominated under the category worship and song - Faith and celebration: “It`s that good coming back and being able to know this event keeps so beautiful. Always above expectations the greatest gospel music award with no doubts. I feel so happy for being with one more part of Christ`s body being honored for all work and receiving the recognition of our journey of faith. I feel so happy for all of that”, confesses Dona Kelly. Ton Carfi was nominated under the category worship and song - Faith and celebration: Video Clip and singer of the year. “ The expectation of this event is so big, mainly for its greatness. Everything is so beautiful, everything so well made, and besides being nominated, I was nominated for three categories, and I`m hopeful to win at least one of them. Let`s see what God has for us”, said Ton Carfi. André Valadão was nominated under the category of the singer of the year: “I`m really happy at being here, at being part of this event, and at being able to review good friends. The award itself is not the best part of it, but the importance of praising the Lord these days”, said André Valadão. Cristina Mel nominated under the category of project for children, “I`m so happy for being here. There have been so many things going on in my life and every moment I say: Lord has helped us so far. Winning is not the most important point, but being part of this night”, said Cristina Mel.

“ I will both lay me down in peace, and sleep: for thou, LORD, only makest me dwell in safety.”
(Psalm 4.8)
© 2022 Worldwide Church of God's Power. All rights reserved.
Desenvolvido por Nativa Desenvolvimento
Política de privacidade