A Crowd Of Women Pray In Rio Grande Do Sul

"Faithful women came from many neighborhoods and surroundings to pray (...)" 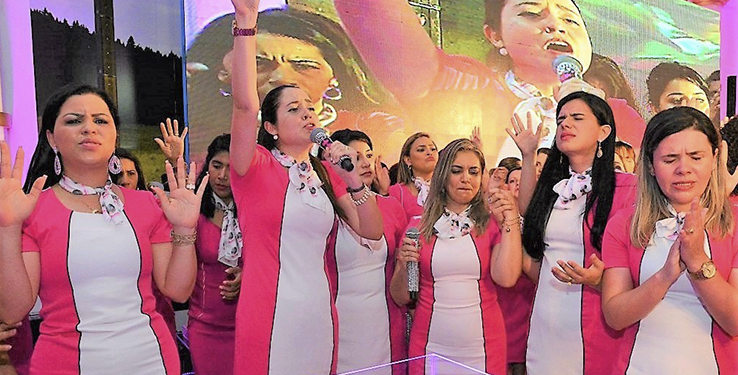 The Worldwide Church Of God`s Power located at Rua Voluntários da Pátria, number 1089, downtown Porto Alegre, in Rio Grande do Sul got small for the concentration of God`s Women In Action (MDA), ministered by the Pastor Janaina Ciani, Bishop Thiago Ciani`s wife. The place became overcrowded on November 15th, and it was necessary to put more than a thousand chairs outside the temple. In order to follow the service a large screen was set outside the church, where the mayor office interdicted the whole block. Faithful women came from many neighborhoods and surroundings to pray, worship God. The service also had the presence of the Pastor Cida Breno from Santa Catarina, missionaries and Pastors from a number of places as well as the state congressman and missionary Volnei (PR), followed by the missionary Jaqueline his wife. At the beginning of the service, very emotional, the Pastor Janaina Ciani beside the Bishop Thiago Ciani stated they were like dreamers. They remembered the struggling, tribulations, and the closure of the church for a period of time due to pursuit that the ministry undergoes. Because of that and many other reasons they insisted on thanking the congressman Volnei and his wife giving them a basket of gifts. At the altar of the temple, a screen was set to broadcast the service on TV as well as social media. The church was ornamented in pink color showing that the service was to nobody other than women. Besides clothes, the Bibles and the little towels of Pastors and missionaries were in pink color too. Furthermore, hundreds of women were healed instantaneously during the service.

An example is the housewife Mara Leal, 59, who couldn`t hold her tears and said she would never forget about what happened to her during the service of God`s Women In Action. Mara said she could just hear through hearing device due to the loss of 50 % of the hearing from the left ear and 80% of the hearing of the right ear for more than ten years. But during a clamor that the Pastor Janaina performed together with the other pastors and missionaries, she began to hear normally without hearing device. Mara said she was with this hearing problem for 27 years and that every year her situation worsened. Unable to hold her tears, Mara said: "I have no words to thank our God". Another miracle that thrilled thousands of women was Lídia Leonida Miller `s, 48-year-old, who was with a lump on her back for about a year and a half. Resident of the city of Venâncio Aires, Rio Grande do Sul, she said that the lump was about the size of an olive, and she did not seek a doctor for fearing the diagnosis. "I was too confident at this service and God heard me. Only the Lord knows how I was afflicted with this problem, " she said emotionally. Elisete E. Martins Sarra, 66, who lives in the city of Bagé wasn`t able to bend her right knee for 30 years, but after the prayers she was able to flex it normally. In order to see the cure, the Pastor Janaína asked Elisete to run at the altar. In addition to running, she even went upstairs and downstairs of the temple without any difficulty. Elisete, happy, embraced the Pastor and thanked God for the concentration of women. The Pastor Janaina Ciani is married to Bishop Thiago Ciani, and they have three children and today she serves God after many prayers, cries, and tears of her mother. "Today, my whole family is converted to Jesus thanks to her prayers. Like the way that happened to my life, many children, grandchildren, husbands who have known the word of God and who are here today, one day their mother, grandmother, aunt or someone else prayed to their favor" she concluded.