Honors for Apostle as well as for the project IDE 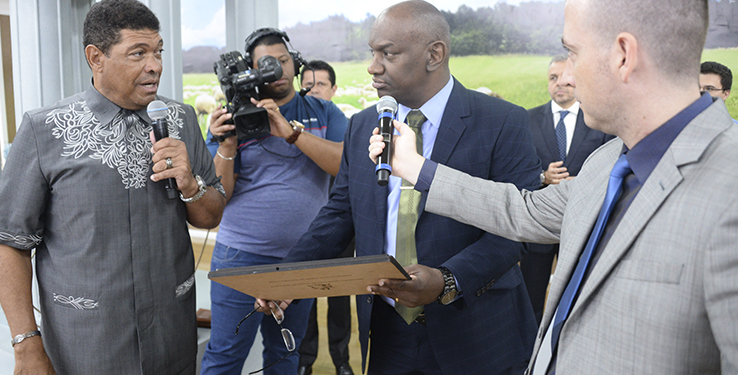 This Sunday, the 14 of January 2018, some authorities were present in the concentration held in Brás, at 10:00 in the morning. Together with José Olímpio, the following congressmen also attended Ricardo Arruda, Chief Police Officer Doctor Figueiredo, Mr Cabo Campos of Maranhão, Pastor Vonei of Rio Grande do Sul, Rodrigo Morais, Marcio of Minas Gerais, João Caldas, Secretary of the Minister Gilmar Mendes.

God through Apostle Valdemiro Santiago blessed all of them. "All came in search of prayer, of victory, of God's direction," said the congressman José Olímpio, introducing everyone, who were welcomed with satisfaction and presented to God by the man of God.

Also, the Mayor of Brusco, Santa Catarina, Jonas Oscar Paegle, delivered a tribute to the Apostle Valdemiro Santiago, with a dedication on the work of the Apostle in favor of the society. The congressman of Maranhão delivered a tribute to Pastor Raquel by actions of the IDE project, considered one of the most impactful social work, recognized by the General Assembly of Maranhão, signed by the congressman Cabo Campos.

“A brother offended is harder to be won than a strong city: and their contentions are like the bars of a castle.”
(Proverbs 18:19)
© 2022 Worldwide Church of God's Power. All rights reserved.
Desenvolvido por Nativa Desenvolvimento
Política de privacidade