AMAS donates tons of food to the needy 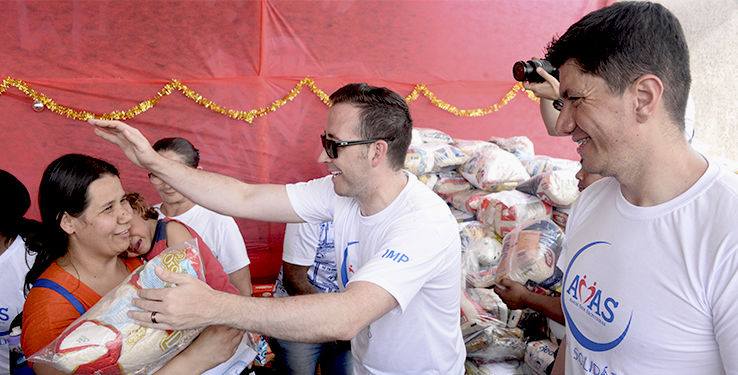 The World Association of Social Assistance (AMAS), an aid arm of the World Church of the Power of God, has donated 450 basic baskets, 500 panetones, toys, thousands of clothing and footwear to hundreds of needy people living in the municipality of Mauá Grande Sao Paulo. The donations were handed out on December 15 and coordinated by Bishop Rodrigo Lopez alongside Pastor Regiane, his wife, with the support of the missionary Márcio Santiago and a team of volunteers. At the initiative of the leadership of the World Church, Apostle Valdemiro Santiago, IMPD's top leader, donated a ton of non-perishable food. In addition to these donations, the faithful of the church contributed donations to soften the suffering of the needy. According to the missionary Márcio Santiago, the financial crisis helped to worsen the country's situation, which further affected the needy. According to him, it has even increased the number of homeless people throughout Brazil. "The level of unemployment has reached one of the highest peaks in history (14 million unemployed), and as in all of Brazil, unfortunately our people are suffering". Prior to the donation, Bishop Rodrigo Lopez prayed and blessed the people who were present. It is worth remembering that AMAS carries out social actions in Brazil, helping street dwellers, victims of tragedies such as fires, floods and others like the one that happened in 2015 in the city of Mariana, the mining company Samarco, in the State of Minas Gerais. In addition to these donations in Mauá, AMAS also performed haircuts, manicure services and even took distraction, joy to the children and distributed candy, popcorn and candy. The work of AMAS is frequently carried out throughout Brazil, including in other countries. It is worth mentioning that everything that the AMAS gives to the needy is the result of the donation of the faithful or supporters of the World Church of the Power of God. In order for this donation to reach the hands of the needy, AMAS counts on a group of volunteers, who are responsible for separating clothes, shoes, food, and assembling kits and basic food baskets to serve the needy.

In Santo Amaro, South Zone of São Paulo, Christmas Solidario will be on December 23rd for approximately 500 people. Coordinated by bishop Alex Silva, his wife and the team composed by the worker Roberto Araújo and the evangelist Clécio, the event will happen in the field of CDC (field of the Center of Coexistence) of Jardim Bandeirantes. On the 24th, the World Restoration House, located in the city of Ibiúna, in the interior of São Paulo, will also hold its Christmas Supper. "We have an average of 45 inmates who are being treated for chemical addiction here in the house, and unfortunately most do not receive a family visit, and that's why we celebrate here," said responsible coordinator Márcio Alexandre de Barros. According to him, the organ is maintained by the World Church of the Power of God.

"Wherefore the LORD God of Israel saith, I said indeed that thy house, and the house of thy father, should walk before me for ever: but now the LORD saith, Be it far from me; for them that honour me I will honour, and they that despise me shall be lightly esteemed."
(1 Samuel 2.30)
© 2021 Worldwide Church of God's Power. All rights reserved.
Desenvolvido por Nativa Desenvolvimento
Política de privacidade